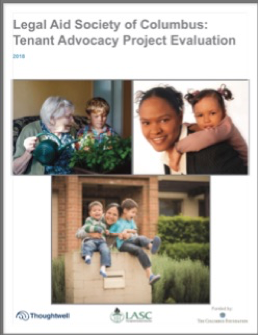 January 29, 2019 - 9:24 am
One of the most important lessons we've learned in five years of media advocacy is that issuing a report is a fantastic way to get media attention for an issue.

Reporters need strong hooks. Data-rich reports that provide fresh information on important issues are strong hooks. If the report includes one or more powerful personal stories and policy recommendations or other calls for action, the newsworthiness is even stronger.    But don’t just take our word for it. Here are two examples of recently released eviction-focused reports that garnered strong media coverage.  In both cases, Voices was brought into the process early on, allowing us to plan ahead and be strategic about how to maximize media potential.

Last fall, Ohio State Legal Services Association and The Legal Aid Society of Columbus asked for Voices’ advice regarding the media value of the findings of an evaluation of their longstanding Tenant Advocacy Project, which is funded by a local foundation. The report highlighted the benefit of legal representation for low-income tenants and suggested that more could be accomplished with additional funding. The foundation was holding an event to present the findings, and OSLSA wanted our help to get media coverage, ideally prior to the event.

The report showed great results, plus the local press had been covering eviction for months, so we were optimistic about the prospects for good media. Together with OSLSA, we offered key local reporters the opportunity to receive the report ahead of its release (on an embargoed basis), identified individuals willing to tell their personal eviction stories, and prepared the lead attorney for media interviews. The plan worked. Coverage highlighted local legal aid advocates as experts in housing and evictions and amplified the impact of the report. This came in handy a few weeks later as the city council considered a retaliatory eviction ordinance and the same reporters were looking for comments and sources. The best clips on the Ohio report are available on the Voices website.

Last summer, the Philadelphia Bar Association and other members of the newly formed Pennsylvania Voices reached out to us for help publicizing a report that was still in development. Economic Return on Investment of Providing Counsel in Philadelphia Eviction Cases for Low-Income Tenants showed that Philadelphia could save $45.2 million per year by spending $3.5 million annually to provide legal counsel for low-income tenants at risk of eviction. (Talk about newsworthy!) The report was released in November, giving Voices several months lead time to work with the task force to devise an embargo strategy that targeted key print and electronic media. In its press release the Bar called for the city to provide legal counsel to low-income tenants at risk of eviction, which increased media interest in the report.

Fourteen national and regional media outlets have covered the study thus far. Following the media coverage, Philadelphia’s mayor made a public statement acknowledging that his office was discussing the findings with city council, and that he is hopeful the city will be able to include $3.5 million in its budget to cover the cost of funding legal aid for low-income tenants in eviction cases. The best clips featuring the Philadelphia report are available on the Voices website.

Are you working on or contemplating a report? Reach out to one of us as early in the process as possible, and let us help you think about media potential.


Your next report could be media gold